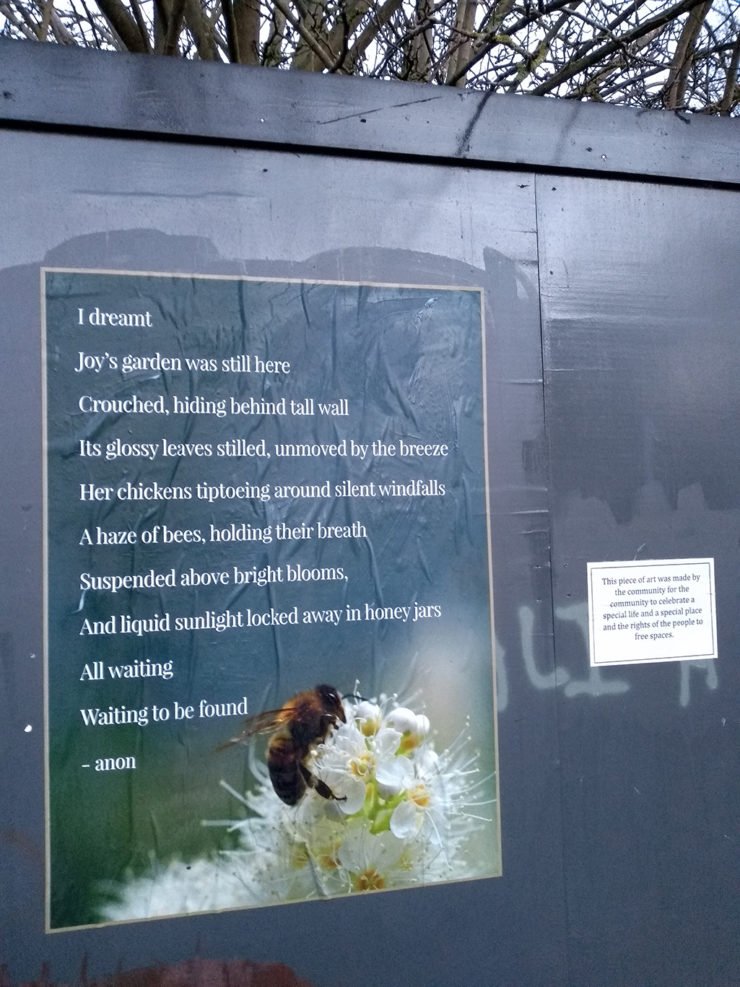 Sam Davies writes: It was almost exactly four years ago – August 2015 – when the Queen Edith’s Community Forum first got in touch with the City Council about the vacant site on the corner of Hills Avenue and Baldock Way. This had been separated off from the house at 39 Hills Avenue, when the previous tenant moved out and it was earmarked for housing development.

We made a very simple request of the City Council – to let local residents maintain the site as a community garden until the council was ready to build on it – as a ‘meanwhile’ space.

The video below, made in 2019, explains the story so far…

We saw this as a positive move for the north-west quarter of Queen Edith’s which has virtually no public green space. It also felt like an appropriate tribute to the previous tenant, Joy Barker, whose loving care of the plot had created a real local oasis, loved by children and adults, where you could stand and watch the chickens scratch and admire the ripening fruit and just relax for a moment.

Unfortunately the Council officers at that time weren’t willing to contemplate trying such a venture; and since then the site has been surrounded by tall battleship grey fencing and left to become an overgrown eyesore. Some local residents even decorated the fencing, including the rather lovely, professional-looking poster above.

But the Queen Edith’s Community Forum team kept asking why it has to be this way. And finally, after four years of lobbying, and with recent support from Katie Thornburrow, the new Executive Councillor for Planning Policy and Open Spaces, we now have agreement from the City Council that we can indeed use the plot as a ‘meanwhile’ community garden.

I should emphasise that this doesn’t mean that the plan to build on the site has been abandoned; indeed it is part of our agreement with them that we will hand it back when requested; but at least until they are ready to build (probably in a couple of years’ time), we have permission to restore it to the benefit of the local community.

In 2019, with a couple of days’ help from a Community Payback team led by our lovely City Ranger, Ed, we cleared the flytipping, cut back the overgrown plants and made the space safe. Since then we have planted shrubs acquired from the Fendon Road roundabout rebuild plus other plants gifted by locals and around 200 bulbs which should make for a beautiful display next spring. We’re in the process of restoring two benches and we’re full of ideas for creating a ‘Little Free Library’ and other fun things. Consistent with our desire to make the garden a space for people and nature, we’re also planning to put back Joy’s bird table (rescued by a neighbour), build a bug hotel and leave undisturbed spaces for wildlife.

We’ll update these pages as the project moves forward. Please do get in touch if you are interested in helping or to let us know your thoughts via hello@queen-ediths.info.